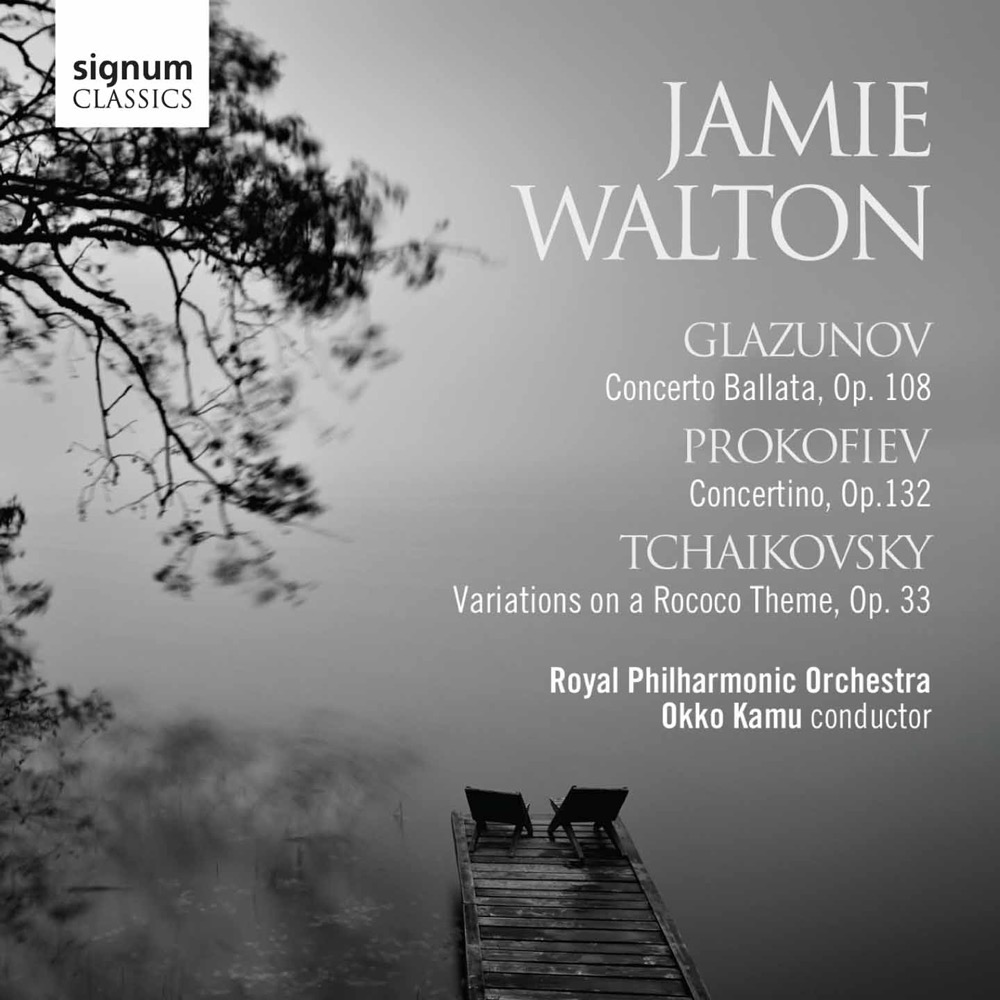 Star British cellist Jamie Walton returns to Signum with a program of Russian repertoire by Glazunov, Prokofiev and Tchaikovsky. Joined by the Royal Philharmonic under Okko Kamu, the disc includes the original version of Tchaikovsky’s Variations on a Rococo Theme. “This is probably the best performance of the Elgar Cello Concerto that I have heard. [Jamie] Walton cannot be beaten. I shall treasure this recording – literally: I shall hoard it against a musically rainy day.” (The Elgar Society Journal – Signum: Elgar & Myaskovsky (SIGCD116))

Jamie Walton was born in Germany before moving back to the UK at an early age. Noted for his rich, powerful sound with purity of tone and emotionally engaging performances he was one of the great William Pleeth’s last students who said of him: “He is a cellist of outstanding performance ability. Combining warmth of tone with a technical command that reaches dazzling proportions, he leaves little doubt as to the success that lies ahead of him - he is a musician of great integrity whose performance give great pleasure” and has already been compared by some reviewers to great cellists of past times with his distinctive sound and clean interpretations marking him out as a true individualist. Jamie plays on a Guarneri instrument dated 1712.

In the UK Jamie Walton has performed concertos with London Philharmonic, Royal Philharmonic and Philharmonia Orchestras. He gave his BBC National Orchestra of Wales debut with a Radio 3 broadcast of the Elgar concerto and has appeared throughout much of Europe, the USA, New Zealand, Australia and the UK performing concertos, recitals and giving broadcasts in some of the world’s most eminent © Wolf Marloh venues and festivals. He recently performed the Lutosławski concerto in Poland and made his Finnish debut with Bloch’s Schelomo alongside Bach and Britten Suites at the Riihimäki Summer Concerts Festival before returning for a series of Walton concertos with the Lahti Symphony Orchestra/Damian Iorio at the Sibelius Hall. As a recording artist for Signum Records he has recorded ten concertos with the Philharmonia Orchestra in London, including those of Dvořák and Schumann with Vladimir Ashkenazy. He has also recorded much of the sonata repertoire for Signum to significant critical acclaim, as well as the solo suites by Benjamin Britten which he also made into a film with Paul Joyce, released on DVD through Signum Vision and premiered on Sky Arts.

Jamie Walton is as passionate about chamber music as he is with concerto work and has performed in many of the world’s great concert halls in both capacities, including Lorin Maazel’s Chateuaville Foundation in Virginia through personal invitation. The Washington Post review by Robert Battey after his debut with Finghin Collins at The Phillips Collection said: “Walton is a major cello talent. He sports a particularly strong left hand – dead-center intonation and a wonderful, lithe vibrato that’s alive in every register. Though relatively young, he plays with the dignity and reserve of a wellseasoned artist.” His activities as a player are accompanied by his role as Founder and Artistic Director of the North York Moors Chamber Music Festival which he started in 2009. The festival has exceeded all expectations in selling out every year and is now established as an annual event during the last two weeks of August with its artistic excellence reflected when, in summer 2011, being shortlisted by the Royal Philharmonic Society in the festival category of its ‘Concert Series and Festivals’ award. Sir Peter Maxwell Davies, its patron, wrote a work specifically for the festival (for cello, baritone and string quartet), given its world premiere at the 2015 festival. Jamie is also setting up a record label affiliated with the festival, launched late in 2015.

Jamie Walton won a scholarship to Wells Cathedral School in a period which he says remains at the soul of his music making and where his first inspirational cello teacher was Margaret Moncrieff before continuing his studies with William Pleeth. He is a member of the Worshipful Company of Musicians and has been elected to the Freedom of the City of London. Jamie was awarded a Foundation Fellowship by Wells Cathedral School for his outstanding contribution to music.

€ 19.95buy
The Tree
The Choir of St John's College, Cambridge